Foreign exchange specialist Travelex today unveiled a unit of currency that has been created for use in space. It is the first currency of its kind in the universe and has been developed in partnership with a team of scientists from the National Space Centre and the University of Leicester.

With Virgin Galactic making its maiden voyage in 2009 and with the signing in April this year of the Global Exploration Initiative, an agreement between the US and the UK to work together on future planetary explorations to the Moon and beyond, Space Tourism is soon to become commonplace. Recognising that tourists could soon be heading further than Spain and Greece Travelex has teamed up with the National Space Centre to create the Quasi Universal Intergalactic Denomination or QUID. 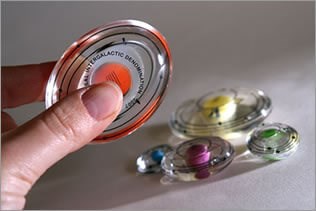 The QUID has been designed to withstand the stresses of space travel and the extreme environment found in orbit around the Earth. It has also been created so that it can be purchased on earth in any one of the 176 currencies used around the globe.

Professor George Fraser from the University of Leicester commented: “None of the existing payment systems we use on earth – like cash, credit or debit cards – could be used in space for a variety of different reasons. Anything with sharp edges, like coins, would be a risk to astronauts while the chips and magnetic strips used in our cards on Earth would be damaged beyond repair by cosmic radiation. What’s more, because of the distances involved, it is more than 230,000 miles from the Earth to the moon, chip and pin technology is also out of the question.”

Professor Fraser continued: “We have had to completely rethink the design of the currency from the materials used to the payment mechanisms and aesthetics. The currency cannot contain any chemicals that might contaminate the astronauts’ life support systems and must be able to survive the extreme environment of space. We also had in mind that the currency should be meaningful for any intelligent life we might encounter in other planetary systems.”

A space qualified polymer called PTFE (polytetrafluoroethylene) will be used to construct the QUID’s - a material widely used by space agencies because of its versatility and durability. Best known for the ‘Teflon’ non-stick pan coating, it can resist high temperatures and corrosive materials. Importantly, too, the currency will not emit any dangerous chemicals into the space tourists’ environment. As a plastic it can be moulded into any shape so can have round edges to avoid damaging people and equipment if accidentally allowed float free in zero gravity.

The QUID is lozenge shaped which means it has no sharp edges but is still easy to store and transport. Each one contains eight planets orbiting a sun, reflecting the position of the planets in Earth’s Solar System. In addition to the aesthetic appeal this will help if the QUID needs to be used on planets inhabited by other life forms. Each of the orbiting planets will carry a number, like the serial numbers on notes, giving the disc a unique code thus allowing currency to be tracked and helping to prevent counterfeits.

Different colours and sizes are used to denote different values. They are valued from one to ten and by looking at today’s rates one QUID would cost you £6.25, 12.5 dollars or 8.68 Euros.

Travelex comment: “It’s only a matter of time before people will be walking up to our shops and asking for QUIDs for their two weeks in a space hotel. There will be a real need for this currency to be introduced to meet the needs of those intergalactic tourists. Wherever we go on holiday – whether its Spain or Saturn we’ll always want to take some cash. Apart from anything else, if you’d just had a fortnight in space you’d definitely want to buy a souvenir to bring back.”

Travelex is currently making preparations for space tourists to be able to change the currency at its shops around the UK and also has plans to make them available online. In addition, a request has been submitted by the business to open the first bureau de change on the moon.

High earning businessmen and celebrities can travel into space today for around $10 million. Microsoft billionaire Charles Simonyi and Iranian American businesswoman Anousheh Ansari were the most recent space tourists, travelling to the International Space Station with SpaceAdventures at a cost of around $20 million.

Britain’s Virgin Galactic, the world’s first spaceline, takes off next year taking space tourists on sub-orbital missions. These flights go past the 100 kilometre altitude to where space officially begins. Another 'NewSpace' entrepreneurial venture, Bigelow Aerospace in the US, last year claimed that it intends to have space hotels ready to deploy within five years. It has launched two test ships already and they are in orbit now.

National Space Centre scientists predict that regular trips to space will be commonplace within five years with tourist facilities on the moon a distinct possibility by 2050.

Tania Burchell, Space Communications Press Officer added: “Space tourism is a reality. There is every chance that in our lifetime we’ll see a week-long loop around the moon in the same holiday brochure as bucket and spade holidays to Spain.”

The QUIDs also require a new space age wallet to prevent them from floating around in gravity free areas. The coins can be stacked upwards in a fabric tube fastened at the top by Velcro. The currency makes ‘science fact’ of some of the other space currencies featured in popular science fiction; including the Altairian dollar from the Hitchiker’s Guide to the Galaxy, Gold pressed Latinum from Star Trek’s Deep Space 9 and Galactic Credits seen in Star Wars.